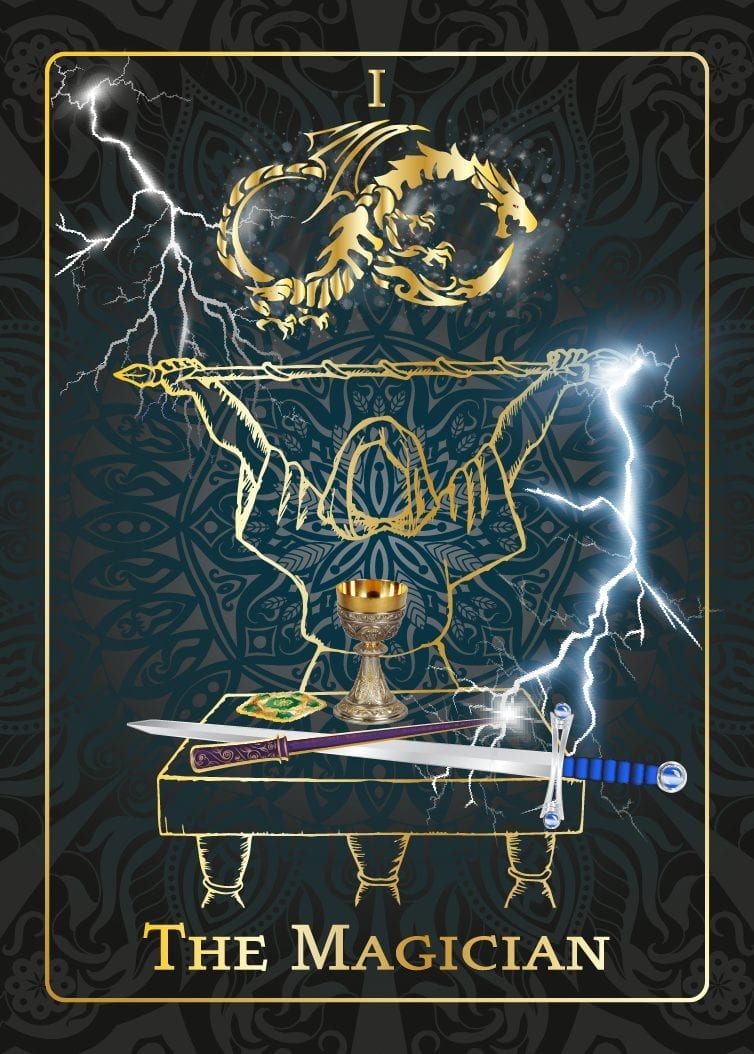 Now is the right time to act.

As a master manifestor, the Magician brings you the tools, resources and energy you need to make your dreams come true. Seriously, everything you need right now is at your fingertips. You have the spiritual (fire), physical (earth), mental (air) and emotional (water) resources to manifest your desires. And when you combine them with the energy of the spiritual and earthly realms, you will become a manifestation powerhouse! The key is to bring these tools together synergistically so that the impact of what you create is greater than the separate parts. This is alchemy at its best!

Now is the perfect time to move forward on an idea that you recently conceived. The seed of potential has sprouted, and you are being called to take action and bring your intention to fruition. The skills, knowledge and capabilities you have gathered along your life path have led you to where you are now, and whether or not you know it, you are ready to turn your ideas into reality.

In your quest to manifest your goals, you must establish a clear vision of what you will create (and why) before you act. It is not enough to be motivated by ego (money, status, or fame) – you need to have a soul connection to your goals and intentions. You are a powerful, creative being, and this is your opportunity to bring your Higher Self in alignment with your day-to-day actions to create the future you want most.

When you are clear about your ‘what’ and your ‘why’, the Magician calls on you to take inspired action. You will need focused attention and intense concentration to bring your goals to fruition. Focus on the ONE thing that will move you towards your goal. Commitment to the task is essential, so drop any distractions that may draw your focus away from what you want to achieve. Be methodical in your planning to make sure that you stay on track and carry out your tasks.

the card is about getting an idea and finding a way to verbalize it. This is the first step toward making it a reality. Which is why the Magician can indicate a time when one is eloquent and charismatic, clever, witty, inventive and persuasive.

Keep in mind, however, that the Magician could be a trickster. If this card represents some magnetic person in the querent’s life, they need to make sure that he’s or she is a genuine magician, not a con man.

The card can also indicate an interest in certain careers or someone who is already in one of those careers: a scientist, inventor or medical professional. The card also relates to careers where speech and writing is of great importance: salesman, motivational speaker, storyteller, politician, commentator. This might be the querent himself, something the querent wants to be, or someone who was, is or will be in his life.

Most importantly, the Magician card stands for the “reveal” – as in a magic trick. The handkerchief is draped over an empty box, the Magician waves his wand, *presto!*–now there is a dove in the box. The Magician card does the same for the querent–only what it reveals is not birds or rabbits but NEW ideas. Emphasis on NEW. When the Magician card appears, the querent is likely to say: “Now there’s an idea! Why didn’t I think of that before?” Truth is the querent probably had that idea in her head all along. The Magician merely revealed it to her, allowed her to verbalize it and crystallize that idea. But what will the Querent do with this idea?

The magician raises his staff towards infinity with self-assurance and focus.  On his table,are the tools that he has the skill and power to use – the wand of ambition, the sword of intellect, the cup of emotion and the pentacle of manifestation.

The magician has the mental ability, passion and creativity to conjure new things in life.  This card heralds our ability to tap into the inner self in order to make things happen in the outer world.  Look for opportunities that require focus, talent and inventiveness.  At times the magician may warn about trickster energy; it is the energy of change but must be used with compassion and wisdom.  If used well, however, these tools can help us achieve much in our lives – perhaps even a little magic!

Magician is the male power of creation by willpower and desire. The Daragon lemniscate (infinity symbol) over his head indicates the energy of thought. Thus, he draws divine power down from the heavens into his wand, molds it with that energy of thought, and makes it manifest on Earth. This is that most ancient magic to make real whatever he imagines in his head merely by saying it aloud.

The Magician is sometimes represented by Mercury. Mercury is the planet and god of smooth talkers and salesmen. Also clever with the sleight of hand (Mercury *was* the god of thieves!) and a medicine man – either a real doctor or someone trying to sell you snake oil.

The 4 suits before him remind us of the 4 aces, which in the Tarot symbolize the raw, undeveloped, undirected power of each suit. When the Magician appears, he reveals these to you. The tarot reader might well interpret this card as telling the querent that they will be given a vision, an idea, a magical, mental image of whatever it is they most want: the solution to a problem, an ambitious career, a love life, a job.

On one level, the reversed Magician shows you are exploring what you wish to manifest, but you are not taking action yet. You are uncertain if you have everything you need and may be unsure about how to make it happen. If you take care of what you intend to manifest, the Universe will work out the how. Stay attuned to your intuition and pay attention to opportunities as they arise. These are like little breadcrumbs that will take you closer to your goal.

If you are already acting on your goal, the reversed Magician can be a sign that you are struggling to see progress or success. Several factors may be at play. Perhaps you have an idea but don’t know what action to take to manifest it. Perhaps you are not clear on your desired outcome so your efforts are misdirected or unfocused. Maybe you have lost touch with your ‘why’, or it wasn’t compelling enough, and now you’re lacking motivation in completing the goal. Or perhaps your end goal is out of alignment with your Highest Good and the Universe is sending you a big “Stop! Go Back!” sign.

At its worst, the reversed Magician signifies greed, manipulation and trickery. You may be masterful at manifesting, but if you are out of touch with your Higher Self, you may only do it for your personal gain and at the expense of others. Sometimes you may fall into this trap unintentionally. If your goals are not coming to fruition or something feels ‘off’, tune into that and asking yourself if you are working for the highest good or solely for your own benefit.

In a career reading, the Magician reversed shows that you have many skills, talents, and capabilities, but your real potential is not being maximised. You may realise that you have so much more to give. Or perhaps you know you are great at something, but you have not allowed yourself the opportunity to nurture and explore this skill. What is impeding you from using these abilities? What needs to change for you to reach your fullest potential?