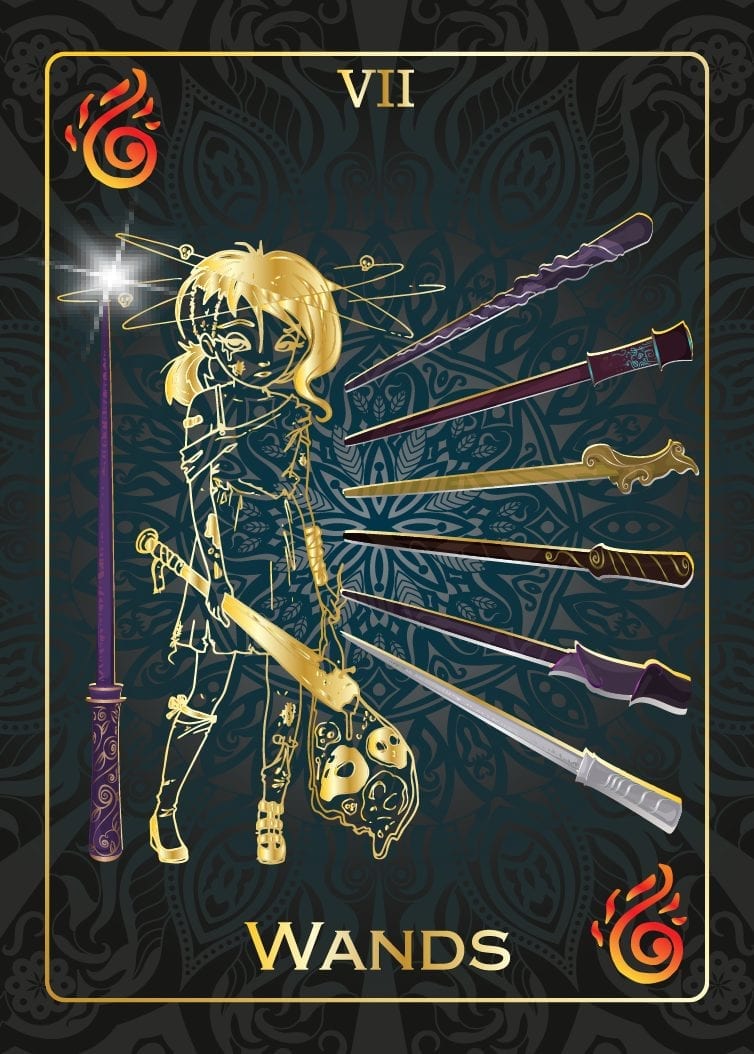 After the success of the Six of Wands, you are now in an enviable position and are being challenged by others who want to take your place. You worked hard to get to where you are, but some people covet what you have and are prepared to fight you for it. While it is flattering that they strive for your success, it also makes for a tense and competitive environment because you need to protect what you earned and must continually prove yourself.

It is a sad fact of life, but the more visibility you have as a leader in your field and the bigger your audience, the more likely it is that you will need to grapple with this kind of pressure. Others see your success and will either challenge your point of view or want to take you down; sometimes called the ‘tall poppy syndrome’. When the Seven of Wands appears in a Tarot reading, expect to see an increase in ‘haters’, trolls and people who disagree with you. You will need to secure your territory and fight for what you stand for. You may also want to engage a lawyer or a loyal support team who can defend you from any possible threat.

The Seven of Wands may appear when you hold a contentious point of view or wish to voice your opinion in a public forum. Be ready to support your argument and back yourself. Stand firm in your conviction of what you believe (and why) so that others do not topple you from your mountain of self-belief.

Sometimes, this threat or opposition may catch you by surprise, and you feel inadequately prepared for such a battle. Just like the man in the card has rushed to put his shoes on and ended up with a mismatched pair, you must scramble to fight even though you don’t have everything in place. To be better prepared next time, the Seven of Wands encourages you to map out any potential threats or risks before moving ahead with your plans. That way, you can have a ‘worst-case scenario’ plan ready to go.

The Seven of Wands can also mean a challenge to the success of a creative project from an external source. Someone or something may get in the way of you being able to pursue your goals and dreams. While it appears to block your path forward, you can overcome this obstacle by drawing upon your strong self-confidence, self-belief, and continual self-improvement. Establish clear boundaries and then protect them so that others do not mess with you. Hold your ground, take a stand, and defend your position at all costs. This will require courage and persistence, but you have the strength and determination to do it. Keep fighting for what you believe in and confront those who may oppose or threaten you.

The Seven of Wands reversed shows that external pressure is weighing you down, leaving you doubting yourself and whether everything is worth it. It may seem as if you are under constant opposition. At first, you could hold firm, but after a relentless battle, you are now exhausted and ready to give up altogether. Don’t let this get to you! Even if you are weary, this card urges you to keep fighting for what you believe in. Stand strong, own your position and don’t change who you are just to keep others happy.

The Seven of Wands reversed can also mean you think others are perpetually criticizing you. Your family or friends are questioning your choices, such as staying in a challenging relationship or an unfulfilling job, and you would prefer if they could just keep their mouths shut and let you be!

The Seven of Wands reversed serves as a reminder that you will not always win everyone over. There will still be challenges and opposition to your point of view, and you cannot keep everyone happy all the time. Thus, it is time to draw your line in the sand and say, ‘This is who I am, and this is what I need right now’. There cannot be any compromise or negotiation at this stage; hold your ground with determination and courage.

The reversed Seven of Wands may affirm that you are overwhelmed by the challenges and responsibilities in your life, finding yourself quickly snowed under and unable to look at the bigger picture. You may have taken on too many commitments and now want to focus your attention on only one or two things. You may also worry that you must compete against others, leaving you feeling somewhat inadequate and vulnerable. Rebuild your self-esteem and confidence and have faith that you can achieve what you set out to do.

Finally, the Seven of Wands reversed can appear when you are trying to avoid conflict wherever possible and, as a result, you are backing down from your point of view too easily (or too often). As soon as someone challenges or opposes you, you compromise or give in, instead of standing up for yourself. Is being accepted and liked by others more important than fighting for what you believe in? Alternatively, you may have tried everything and given it your best shot, but you now see it is not worth the struggle. Even though you might not have made any progress yet, it is time to let this one go and move on. Yes, it may feel like giving up but, in the long run, it will be for the best.